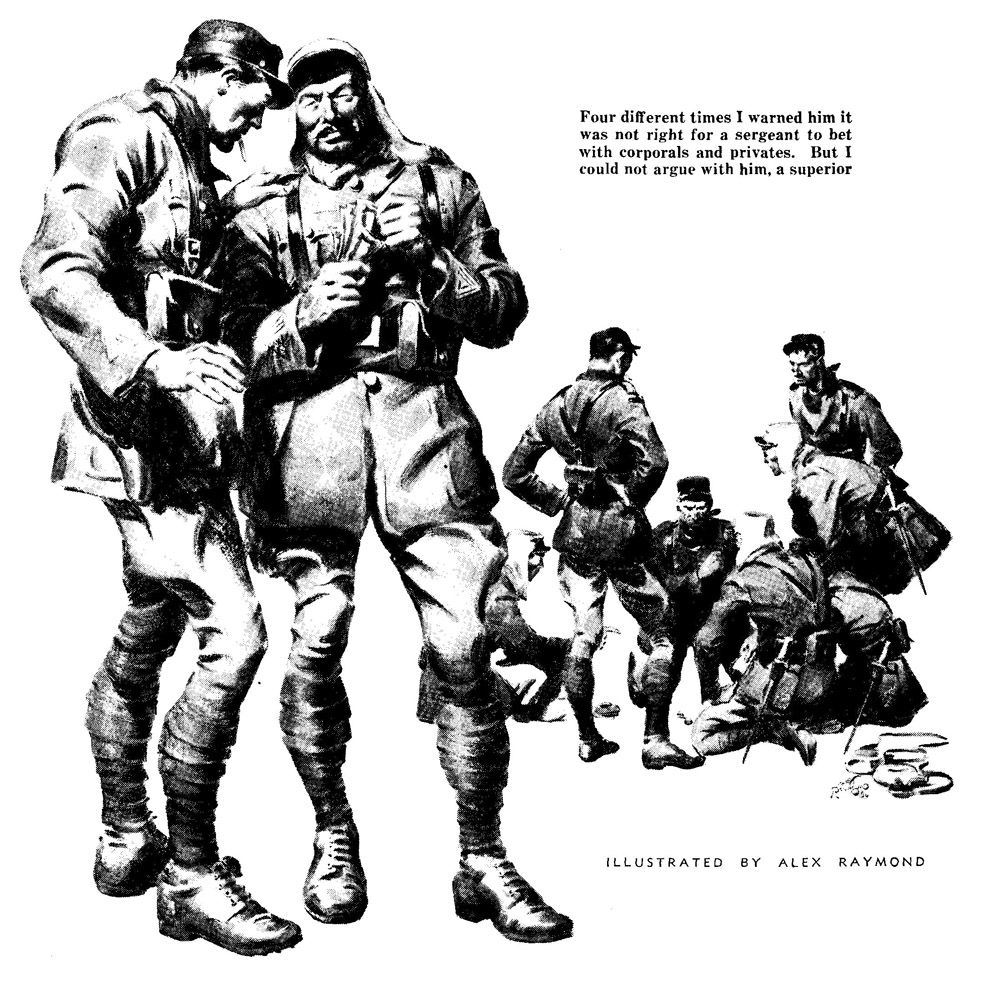 Russian Roulette is an extremely short story by pulp writer Georges Surdez. The tale is as brief as the muzzle flash from a revolver. One could probably finish reading it by the time a bullet is done bouncing around the insides of a man’s skull, shredding the brain into oatmeal, after it enters through their temple. Russian Roulette tells the story of what happens to some soldiers in the French Foreign Legion stationed in North Africa when they have some peaceful time on their hands. I read this in an ebook that contains four stories by this writer. Surdez wrote quite a bit about the legionnaires and their adventures and their codes of duty and honor. The collection is called The Free Shall Live and Other Stories and can be found at The Pulp Fiction Bookstore.

I’ve never served my country in the military. I didn’t have the guts for it. I was far too cowardly and self-involved when I was a young punk to attempt acts of bravery that men and women perform everyday in foreign lands, so that we may enjoy the freedoms that we sometimes, sadly, take for granted. Believing in ideas bigger than myself was not my brand of whiskey at the time. I would gather, however, when soldiers don’t have their boots dug into the mud, working hard at the business of killing and staying alive, they might have some considerable downtime. Being stalked on a scarred battlefield by the Grim Reaper as he tries to stick you with a bayonet, chop your head off with a sword, or put a bullet in a soldier’s liver, might get one into a recreational kind of mood once there is a temporary stop in the shelling and strafings from buzzing bi-planes.

I’ve heard some men take to drinking. The spirits might enable a soldier to forget about the last bloody battle that occurred and not care about the one creeping up around the corner like a vengeful angel in an end times prophecy. Some legionnaires might spend their hazard pay on enterprising women with loose morals. If there’s a market for your product you may as well capitalize on the opportunity. Prostitution might possibly be the free market at its most pure. I don’t have the analytical mind of an economist to back that statement up with statistics. However, I do have the expertise of not ever being confused with a saint when it comes to matters of being a degenerate. Finally, other men may decide to bet the devil in games of chance with the loser paying prices in varying degrees of tragedy for themselves. These are the men that take to gambling.

I don’t gamble. I never did and, I pray, never will. I have enough character flaws to keep me from being an upstanding member of society. I have resigned myself to this fate and will spend the second half of my life plugging away on a keyboard as a way of exorcising the demons that come with whatever bottle I am poisoning myself with. However, the last thing I need is to head to the racetrack on a random Monday afternoon in the sweltering heat, down ten beers as my ratty clothes are stained with drinker’s sweat, and blow my rent on the ponies. I will take my chances with cheap booze and bad women.

Conjuring up the titular game of Russian Roulette from the story by Sturdez, it’s never an activity that I felt the need to try. I’ve never been too drunk or desperate enough to put a revolver to my head, one bullet in the chamber,  casually spin that cylinder like a killer from a pulp story and pull the trigger, hoping for the best. I am not sure what outcome a person crazy enough to tempt fate is actually hoping for playing this deadly game? We’ve all taken needless risks, I am sure. Stunts that could cost us dearly. Russian Roulette is a metaphor for such careless behavior. Legend has it, by the way, that Surdez coined the term Russian Roulette in this story that first appeared in Collier’s in 1937.

I had never heard of Georges Surdez until I ran into Mr. Pulp at that strange outpost at the end of the world. Of the vast library of pulp fiction authors, I have barely scratched the surface and my library card was stolen by the librarian who looked like Dorothy Malone in The Big Sleep. Many of the pulpy ebooks in The Pulp Fiction Bookstore were from authors that I had never read, or, in many cases, had ever been on my radar. I saw this as a great opportunity to read some good literature and write about them. I have never written about books since I was in college. I never graduated.

The action in Russian Roulette takes place in a letter written by a Sergeant Hugo Feldheim in the Third Foreign Infantry to his superior. The communique is in regards to an upcoming inquest concerning the death by suicide of Sergeant Chief Burkowski. The story is written in the learned prose of a gentleman. This is not the language many of us are accustomed to when we’re forced to read the never ending stream of emails filling up our inbox from barely literate co-workers or relatives looking for a favor from you. The language Surdez pounds out on the typewriter is more melodic than my drunk texts to friends who most likely deserve better. It’s also not the tone or vocabulary I would associate when I read the term pulp fiction. As mentioned, I am in many ways a neophyte when it comes to the stories from these pulp magazines.

Surdez does yeoman’s work as he’s able to convey to us, in a literary lightning flash, that Feldheim is a man of honor and discretion. We learn that Feldheim was fond of Burkowski, despite the man being a slightly crass braggart. Burkowski is also a degenerate gambler. The man will bet against anyone and put wagers on anything. Anything to pass the time. As you might guess, the wagering turns to the game with the bullet and revolver. Burkowski is not without his own code of honor, however. Once again, Surdez lays out an intimate character portrait of the man with an economy of words that made me think of a more formal and chaste Elmore Leonard.

Since Russian Roulette is such a part of our lexicon, we figure we know how the story will end. Eighty years ago, however, it was probably a new term and the story was modern. Russian Roulette is a good story, written quite well, by an author who understood the codes men of the Foreign Legion lived by. The other three stories have more meat on their bones and should be well worth the time of an adventurous reader. The ebook reads beautifully on an iPhone.

Should the mood strike you, it can be purchased here.