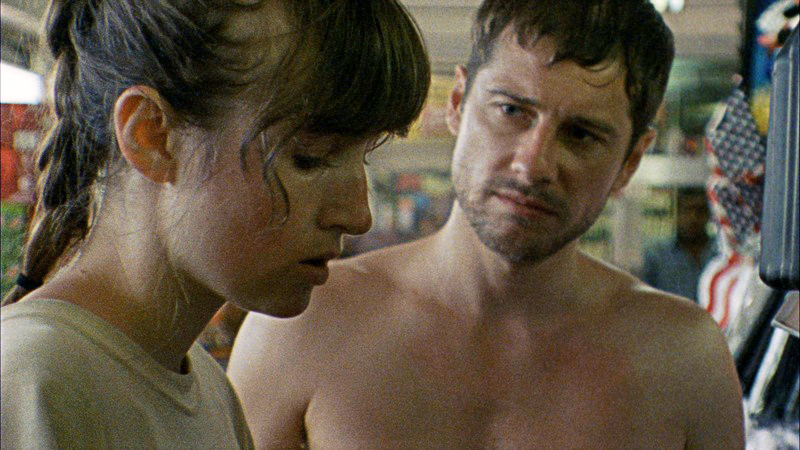 Sun Don’t Shine, the feature film directorial debut by hardworking and talented independent film actress Amy Seimetz, is a hazy neo-noir that takes us through the backwaters and chintzy tourist towns of Florida. It tells the grimy story of two lovers, Crystal and Leo. They argue and discuss the architecture of their relationship as they crisscross the highways and sun baked roads in their beat-up car. It is a toss-up as to what has taken a bigger pummeling over time, the lovers’ automobile or the dented chassis of their romance.

Crystal, played by Kate Lyn Sheil, has the appearance of being a once new and expensive porcelain doll that had the misfortune of being manhandled by sadistic children during its existence. Abuse leads to biological time travel, aging us at speeds that only NASA can understand with the most scientific of instruments. Crystal is also prone to fits of extreme jealousy and torments her lover, Leo(Kentucker Audley), for amorous hookups, probably both real and imagined. Not to be outdone, Leo easily slides into using casual physical and verbal abuse against Crystal, who seems to draw such behavior the way horse turds attract flies. When we first meet the two, they are tossing and slapping each other around in the marshes like two wrestlers on Saturday Night television.

Seimetz gets to showcase her talents as both writer and director in this low-budget movie. This flick rolls down the same roads as the black and white film noirs we watch on late night television, or the great crime novels of the twentieth century that we could purchase in the dime stores of small town America. Seimetz, however, doesn’t focus on the crime that has been committed. We know they are on the run and are trying to lay low. The audience only gets brief, lurid details in a conversation and a fleeting, artistic shot of the aftermath of violent criminal activity. Seimetz wisely chooses to focus on how this event has affected these two fragile individuals who are infected with an unraveling sense of reality. This doesn’t make it any less tense. People riding the fringe only need a nudge to be shoved into the darkness and, oftentimes, aren’t too resistant against the push. Giving in to what they may seen as inevitable is easier than scraping by, living off the scraps of regular citizens.

There is a particularly well shot and tense sequence when a passerby(AJ Bowen) pulls off the highway to offer Crystal and Leo assistance, after their cranky and wheezing automobile refuses to continue until it gets some water into its rusted guts. Audley and Bowen, both indie film professionals, play the scene well and it enables the tension to build without the need of hyperactive editing or the swelling of ominous music as if a monster with large teeth and noxious breath was rising out of a bubbling swamp. Bowen’s character is one of those oppressively friendly people that think they are blessing us with their imperious helpfulness. They always seem to have some ridiculous parable to spout so they can justify their encroaching into your life. The human embodiment of Big Government nonsense, if you ask me. The tension on Leo’s face as Bowen tries to assess the vehicle’s situation, inquiring if there are jumper cables in the trunk, allows the audience to be submerged in the incident as opposed to having it dictated to them using perfunctory lines of dialogue. A lesser film with a larger budget would have played it the conventional way, treating viewers like space aliens who understand the language, but have never seen two people interact with one another.

Kate Lyn Sheil gets her moments to shine as the used up, pushed around Crystal. When we first see her, she is childlike, saying things and staring out the car window in dreamy silence the way a nine year old girl would do. Crystal admits that when people first encounter her they think her stupid because of her quiet demeanor. We learn that this is not exactly the case. She is never going to split the atom in a laboratory, but she is not some silent dullard relegated to watching daytime soaps as she draws pictures of dinosaurs on the backs of takeout menus with crayons. Crystal is a battle scarred veteran of life’s everyday wars. She deserves some pity, but her somewhat ravenous feelings of jealousy make her a threat to Leo and herself. Those we have sympathy for sometimes can be the most dangerous of monsters.

The cinematography by Jay Keitel adds to the nebulous feeling the film broadcasts. The movie appears to have been shot completely by handheld camera. This can sometimes be a distraction, but there are enough inventive shots and camera angles to keep the audience off balance and tuned into the narrative. I especially enjoyed the sequences inside the car as they are driving and searching for answers as if they were located on a folded out road map. The lens always manages to pick up the sun and its harsh light shining on the two, either to investigate them, or perhaps to show them the way out of their predicament. The sparse score by Ben Lovett sometimes seems to conjure up faint memories of Carl Orff’s Gassenhauer, used in Malick’s Badlands.

I didn’t find the film to be completely free of faults. It runs barely ninety minutes and it still drags in certain parts as it seems they make pit stops simply to have one more disjointed conversation about their unhealthy relationship and the dire mess they are in. I found myself thinking that I would like for them to stop mumbling about who is to blame and to just get to where they need to be. They are driving through Florida, not fucking Baghdad. Even with their shitty car and precarious situation, it is a pretty straight drive. It is a minor quibble and Seimetz should be commended for writing and directing a film that makes an oft told story a worthwhile, interesting view.