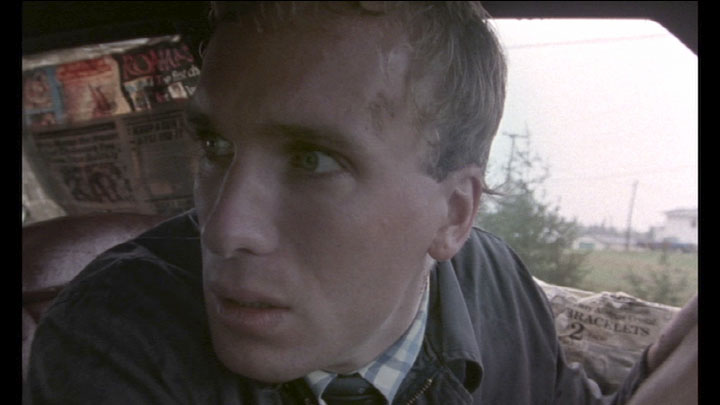 If you are a male and born before 1980, you have probably lamented at least once how easy it is for kids today to get their hands on pornography. Technology is a wonderful thing and has made the masturbatory arts accessible for everyone, not just those with a cool uncle or undersexed, alcoholic fathers who forget to hide their well worn and sticky magazines. However, I will always look back fondly on those hungover trips to the adult book store. You could ease the sting of an unsuccessful night with the ladies by picking up any one of the various classics the adult film industry created for your viewing pleasure. You might think a movie with the title Clean, Shaven would be watched on a vhs tape that was bright red or yellow in color.

You would be wrong.

Severe mental illness is a tragic nightmare, almost Lovecraftian as it spawns otherworldly monsters from once normal people. We’ve all watched the news with those feelings of detached horror as we heard about crimes committed by those who are labeled certifiable by psychological experts. There are just as many stories, however, of society’s mistreatment of those who are mentally ill. One only need checkout Geraldo Rivera’s expose’ of Willowbrook State School on Staten Island to see this in action. You will probably never see a more terrifying, disturbing and heartbreaking documentary. It lays waste the notion that government will care for the weakest of us.

We have seen all the Hollywood movies that deal with the subject. Many of these are horror films that portray the mentally disabled as either hulking madman, or fidgety nerds who talk to their dead mother’s corpse. When done well, these movies have us squeezing our date’s arm until it turns purple, or burying our face in our hands like schoolchildren. Tobe Hooper’s The Funhouse  and, obviously, Hitchcock’s Psycho come to mind.

Sometimes Hollywood makes bloated melodramas on the subject. It turns the victims of mental illness into mawkish pawns, maneuvered around a chessboard of clichéd conflicts and schmaltzy resolutions. Hopefully, the audience will have used their sleeves to have blown snots of sadness into. Sometimes it is tough to remember the Kleenex. There is no iPhone app for that yet.

Lodge H Kerrigan’s Clean, Shaven is an effective movie. It is also one that is tough to categorize. This 1993 film has all the sentimentality of a shotgun slug rammed into a cow’s brain at the local slaughterhouse. It is also not a straightforward horror movie. While not completely linear, it takes the form of a police procedural with a helping of a family drama as the main character, a schizophrenic named Peter Winter, tries to get in contact with his daughter after being released from a decrepit mental institution.

Peter Winter is played in a unusually tacit performance by badass from the 1990’s Peter Greene. You may remember Greene as Zed in Pulp Fiction  or the LA thug Redfoot, who flicks a lit cigarette in Stephen Baldwin’s face in The Usual Suspects. After hearing Alec Baldwin on Stern, apparently the star of 30 Rock would approve of this treatment of his younger brother for the Biblical betrayal when Stephen supported Trump. Maybe Alec can buy Greene a seltzer if they ever run into each other? Greene doesn’t seem like a Hamptons guy, however.

Greene also starred in the criminally underrated Laws of Gravity, which, I believe, is one of the greatest independent films ever made. I would love to ask Greene which movie he is more proud of, Laws or Pulp Fiction? I vote for Laws of Gravity every time. The realism is in your face like a fat dude’s body odor on the crosstown bus.

Greene has a great screen presence. Tall, wiry and handsome, his muscles move like cables under his skin when he performs everyday tasks. His physical appearance underscores Peter Winter’s tragedy in this film. He was a once gifted student that had the entire world at his feet before he became trapped in the haunted maze of his deteriorating mind. A scene where his mother, played by Megan Owen,  shows Detective McNally(Robert Albert) pictures from Winter’s childhood underscores this. Winter’s mother, normally simmering with hatred for what has become of her son, lets her guard down and laments what never will be.

The film is a brisk 80 minutes long. It really plays like an extended version of one of those odd short films you may have seen on USA channel’s Night Flight back in the day. If your day happens to stretch back into the dark ages as mine does. Even with a bargain basement budget, Clean, Shaven is blessed with great sound design and interesting cinematography. There are lots of effective camera angles and detailed close-ups of cigarettes in car ashtrays, fish being gutted and skittish hands making coffee in cheap Styrofoam cups. These shots help convey how schizophrenia makes the dullest of tasks a jarring experience.

And, for those with queasy stomachs, the special makeup effects are very effective. Don’t say I didn’t warn you. There are scenes that our downright difficult to watch. One that comes to mind is watching the main character digging at his fingernails because he believes there is a transistor buried beneath them. There is also a reason the movie is called Clean, Shaven. That is all that needs to be said about that.

This is a film in which I don’t feel a description of the plot is necessary for a review. This is really just a compilation of scenes that somehow comprise a few days in the distorted mind of Peter Winter. It might be fact that a movie about a schizophrenic shouldn’t have the normal three act structure audiences are used to from Hollywood fare. This is not “boy has mind, boy loses mind, boy finds mind again and lives happily ever after” that a studio dangles in front of the latest movie star looking to upgrade their cred with a role that could place them in the hunt for the golden statue.

The movie has many quiet moments that make us feel pathos for Peter Winter, as he has been turned into a tormented creature from an old horror movie. The schizophrenia torments him the way a crucifix stings a vampire. Greene makes us believe Peter Winter has a good heart buried deep within the chaotic sounds of transistor radios and television static that fills his mind. Having a good heart, however, means little to those Winter has destroyed because of his sickness.

The most dangerous monsters are the ones we pity.

This low-budget movie’s Canadian seaside setting gives it a surreal quality and made me think of the strange town in Clint Eastwood’s High Plains Drifter.  Some of the dialogue is stilted and deliberate, but I think that gives the film an interesting dreamlike quality. Characters always act a little off in our most mundane nightmares. Wouldn’t that be how life is for someone with schizophrenia?